A program worth waiting for | Jonathon's Student Story

After graduating from the University of Mary, North Dakota in 2015 with a degree in biology, Jonathon H. had been looking for an opportunity to further his education. Initially he wanted to go to med school, and then thought about dental school and pursuing a doctorate degree, but none of those options aligned with what he really wanted to do.

Jonathon grew up in South Dakota and was raised by a family that really valued education. After graduating from the liberal arts college in North Dakota, Jonathon got married and two days later the newlyweds moved to Italy to work for the University of Mary on the Rome campus. Jonathon’s experiences in Rome clarified what education really means to him - what it can be and the power it has to inspire people and to enrich their lives.

Once back in the United States, Jonathon accepted the position of Program Coordinator of the Mary College at Arizona State University, which is an undergraduate program ASU students can participate in as part of a domestic exchange with Mary College.

Mary College at ASU and the School of Civic and Economic Thought and Leadership share a  similar mission for liberal education and have worked together for the past couple of years. When Jonathon learned about the school’s new Master’s degree program in Classical Liberal Education and Leadership, he felt like this was the program he was waiting for.

“It gives students who desire to learn, who love to learn, an opportunity to come together and build a community of learners in a liberal way. In a way that supports free thought, discourse, and disagreement. It’s an education that’s ordered towards virtue alongside career development,” said Jonathon. “I really just can’t speak highly enough about how fantastic the program is, and how refreshing it is” 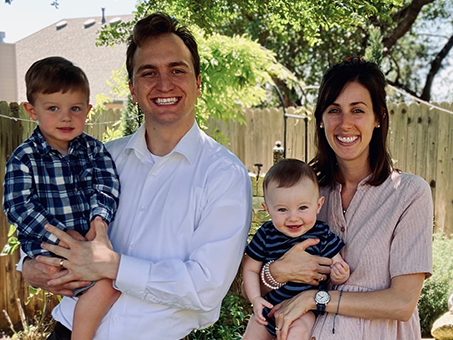 Jonathan was accepted as part of the first cohort and sees the program benefiting his career in several ways: it gives him a clearer vision of what liberal education is, which is the field of study he currently works in and it opens his eyes to the possibilities of what his career might be.

“Not only does it shape my career, it shapes my life. It shapes what I like to call the ‘domestic university’. I’ve got two boys and this is going to impact their experience because of the way in which it enriches my life individually,” said Jonathon.

The master’s program in classical liberal education and leadership immerses students in timeless conversations about the big questions of human life.

“The readings that I’m reading and the engagement that I’m having with the students in my class and the professors, is bringing life to me. It is enriching my life beyond the classroom. That’s something very unique to liberal education is that it not only allows, but it sort of predicated on, the idea that this doesn't exist in the hour and a half that you’re in this classroom, we want this to extend outside of the classroom.”

The MA program in classical liberal education and leadership, offered by the School of Civic and Economic Thought and Leadership, immerses students in timeless conversations about the big questions of human life.

All classes are taught through the Socratic discussion method, and students are provided with regular opportunities to hone their pedagogical leadership skills by leading select course meetings and receiving feedback on their progress as Socratic discussants. As in most graduate programs in the humanities and social sciences, students are evaluated primarily through written assignments that evidence careful thought and reflection, argumentation and textual analysis. Courses are offered across a wide range of subject areas including literature, politics, philosophy, mathematics and science, and leadership.