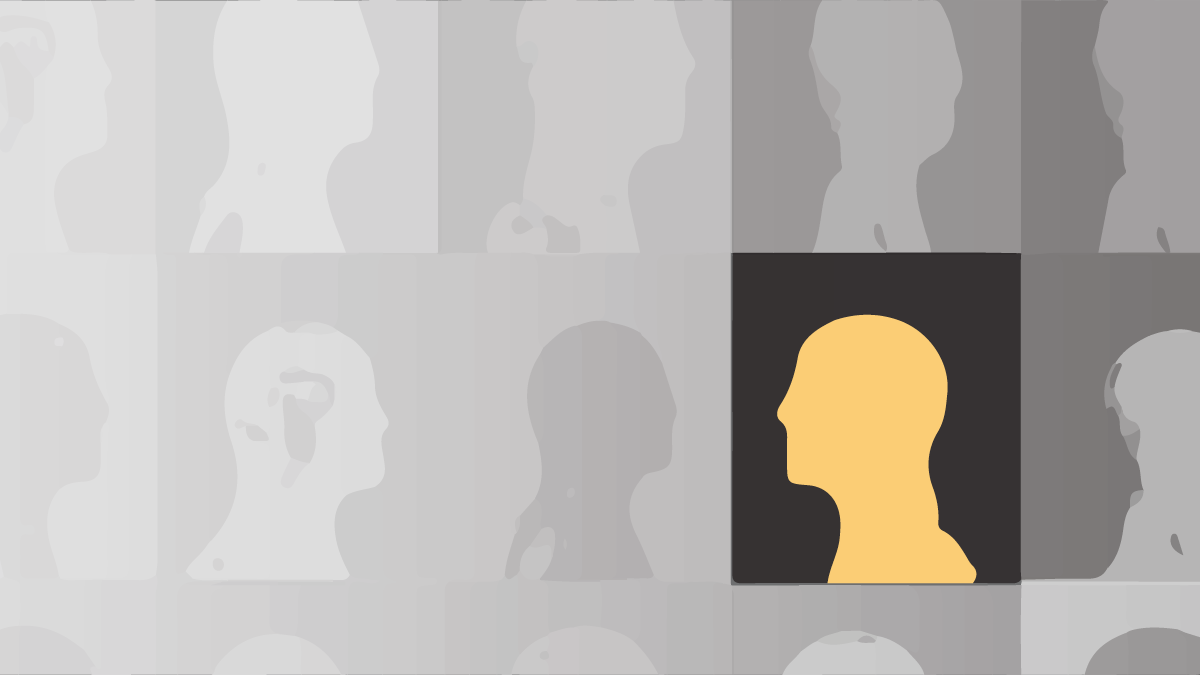 Ideological Conformity on Campus and in American Society

In the 2022-2023 Civic Discourse Project lecture series, we invite you to reflect on the status of open dialogue, dissent, and the pursuit of knowledge today in universities and American society. Throughout the series, we will discuss whether there is room for disagreement and ideological differences in the arts, the media, business, and the academic environment today. 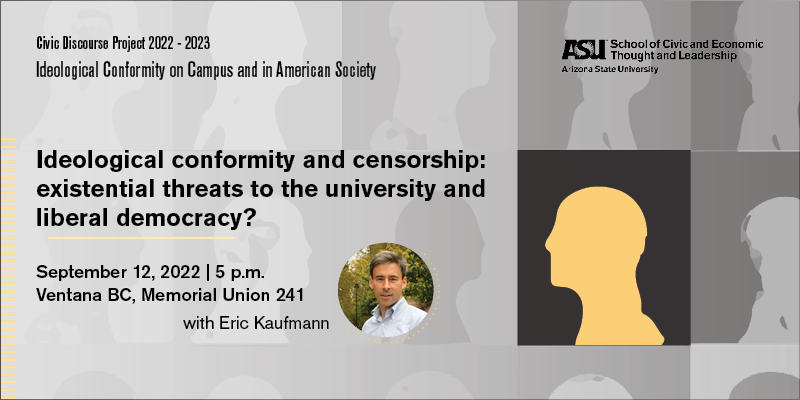 In the kick-off lecture, University of London’s Eric Kaufmann will present his research findings about what he calls “cultural socialism” on campus. According to professor Kaufmann, weak institutional protections for academic freedom and self-censorship impair debate and undermine viewpoint diversity on campus. He argues that “cancel culture” is weaker off-campus but on the rise. Professor Kaufmann will be joined by ASU professor Peter de Marneffe who will raise questions about Kaufmann’s research and conclusions.

Eric Kaufmann is a professor of politics at Birkbeck College, University of London. He is the author of "Whiteshift: Populism, Immigration and the Future of White Majorities" (Penguin 2018; Abrams 2019); "Shall the Religious Inherit the Earth" (Profile 2010), "The Rise and Fall of Anglo-America" (Harvard 2004), "The Orange Order" (Oxford 2007) and "Unionism and Orangeism in Northern Ireland since 1945" - with H. Patterson (Manchester 2007). He is co-editor, among others, of "Political Demography" (Oxford 2012) and "Whither the Child: causes and consequences of low fertility" (Paradigm 2012), and editor of "Rethinking Ethnicity: Majority Groups and Dominant Minorities" (Routledge 2004). An editor of the journal Nations & Nationalism, he has written for New York Times, Times of London, Financial Times, Newsweek International, Foreign Policy, and Prospect magazines.

Light refreshments will be served. 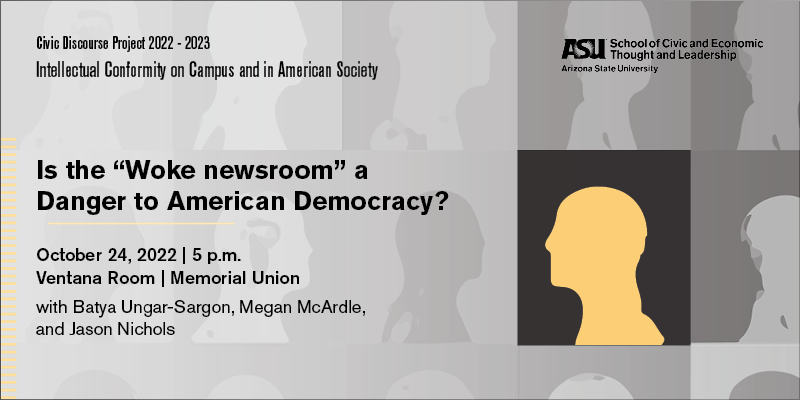 In this panel discussion, you will hear from the three media representatives on whether the mainstream media produce ideological conformity. According to some national commentators, some of the major media outlets are led by a progressive bias which they believe might be anti-democratic and a danger to American democracy.

Batya Ungar-Sargon is the deputy opinion editor of Newsweek. Before that, she was the opinion editor of the Forward, the largest Jewish media outlet in America. She has written for the New York Times, the Washington Post, Foreign Policy, Newsweek, the New York Review of Books Daily, and other publications. She has appeared numerous times on MSNBC, NBC, the Brian Lehrer Show, NPR, and other media outlets. She holds a Ph.D. from the University of California, Berkeley.

Megan McArdle is a columnist at the Washington Post, where she covers the intersection of business, economics, and public policy. An early pioneer of internet journalism, her work has appeared in numerous outlets, including The Economist, The Atlantic, Newsweek, Time, The Wall Street Journal, the New York Times, the Guardian, and Reason magazine. Ms. McArdle has served as the Egan Visiting Professor at Duke's journalism school, a fellow of the Chicago Institute of Politics, and a Bernard Schwartz Fellow at the New America Foundation. Her book, The Upside of Down: Why Failing Well is the Key to Success, was published in 2014.

Jason Nichols is an award-winning full-time senior lecturer in the African American Studies Department at the University of Maryland College Park and was the longtime editor-in-chief of Words Beats & Life: The Global Journal of Hip-Hop Culture, the first peer-reviewed journal of Hip-hop Studies. He co-edited La Verdad: An International Dialogue on Hip-Hop Latinidades (Ohio State University Press). Jason Nichols has been recognized by the University of Maryland community for his tireless effort to help students develop.  In 2018, the Office of Multicultural Student Education gave Dr. Nichols the Academic Excellence Award for Outstanding Faculty and the Student Success Leadership Council awarded him the M. Lucia James Impact Award. In 2015, Dr. Nichols was given the Faculty Advisor of the Year Award by the UMCP NAACP.

Through our Civic Discourse Project, the school is able to bring in top minds in civics, academics and public thought for in-person dialogues. Not only are all of these public talks free and open to the public, but they are also available for viewing on our website. To be informed when new videos are available, sign up for our newsletter and subscribe to our Youtube channel.

Go to the video catalog. 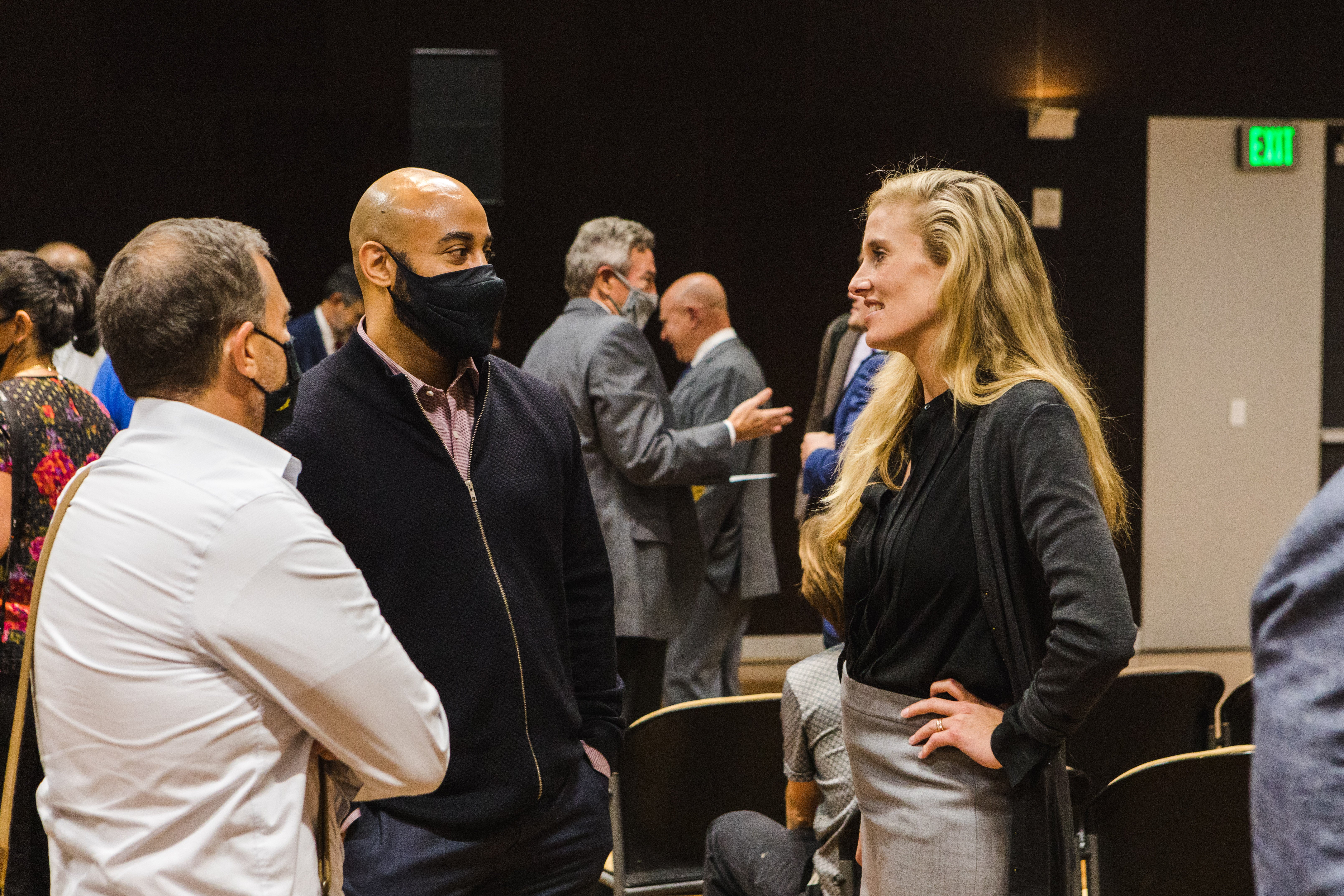 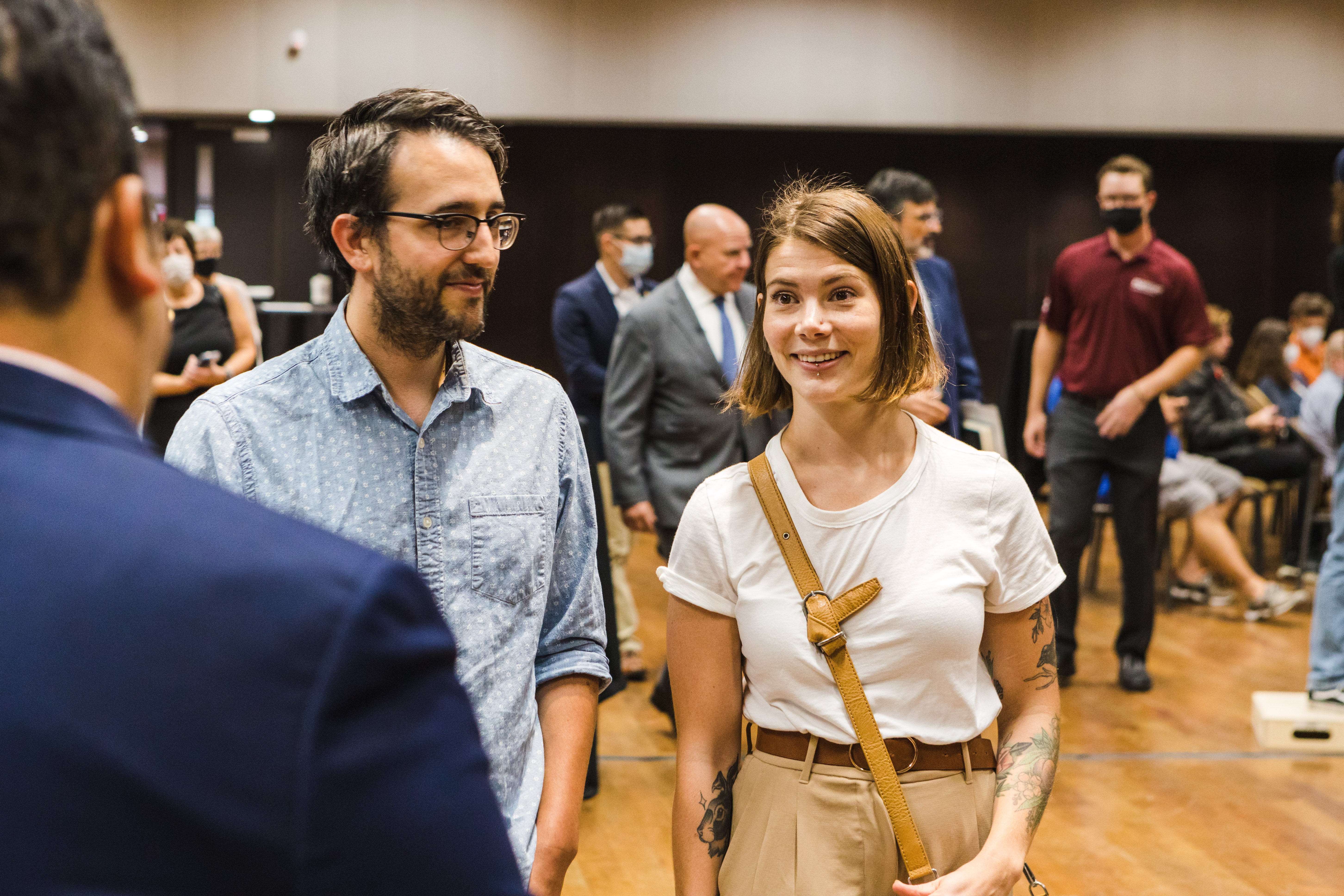 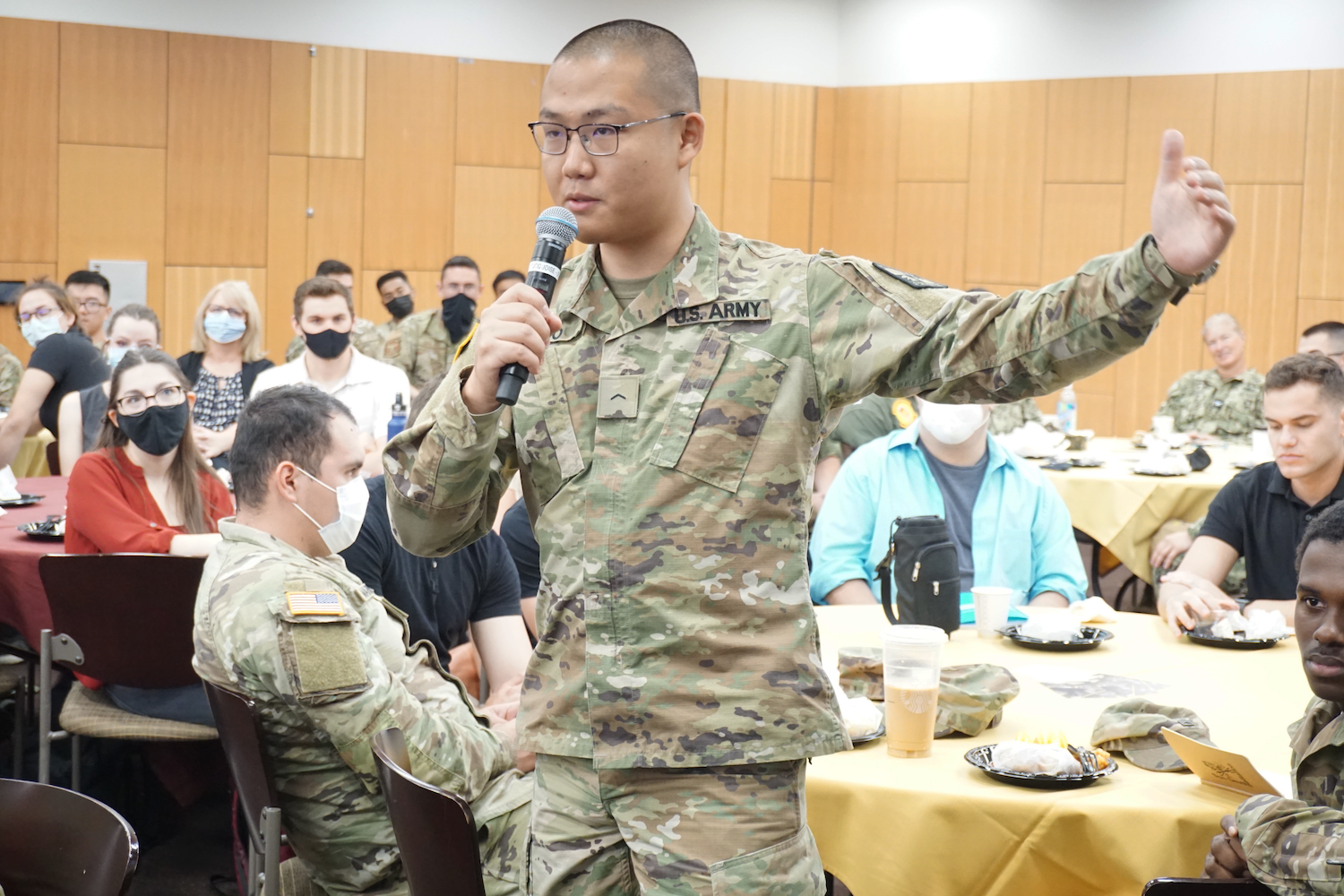 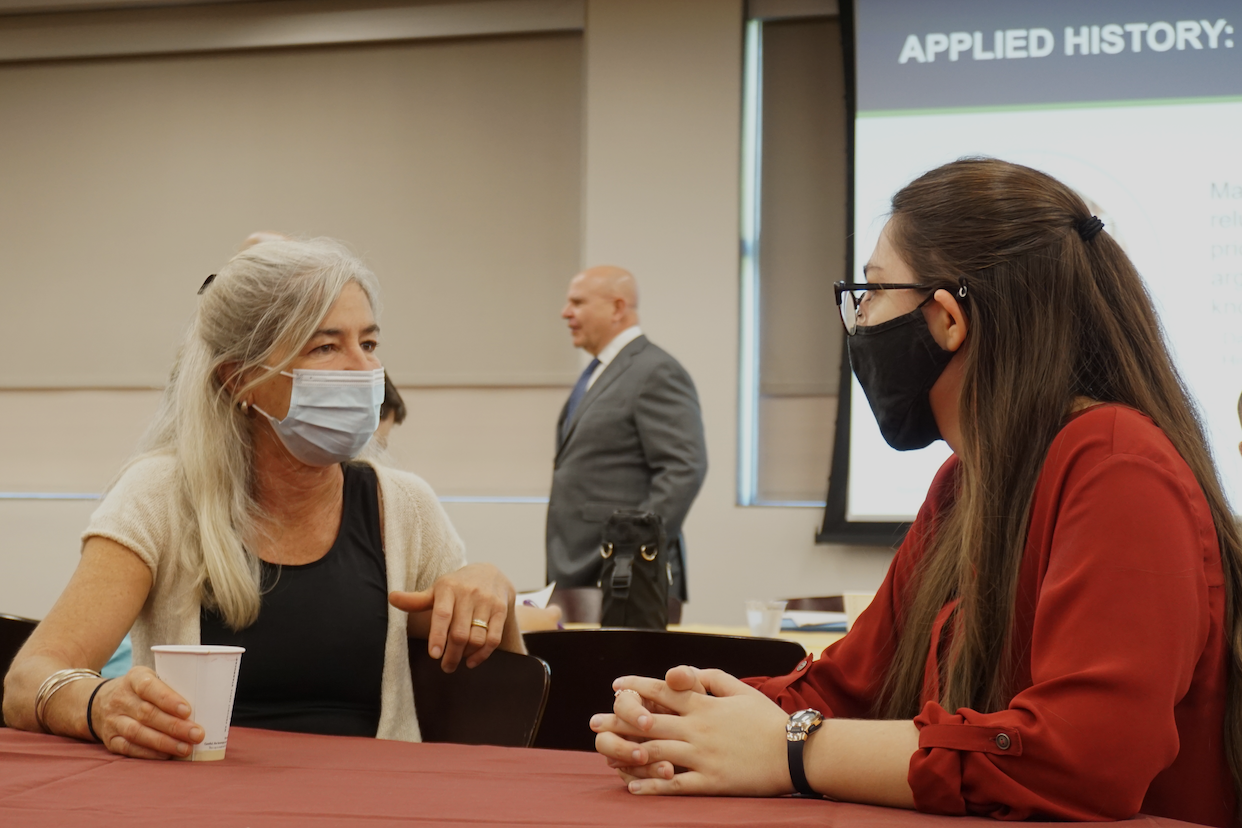 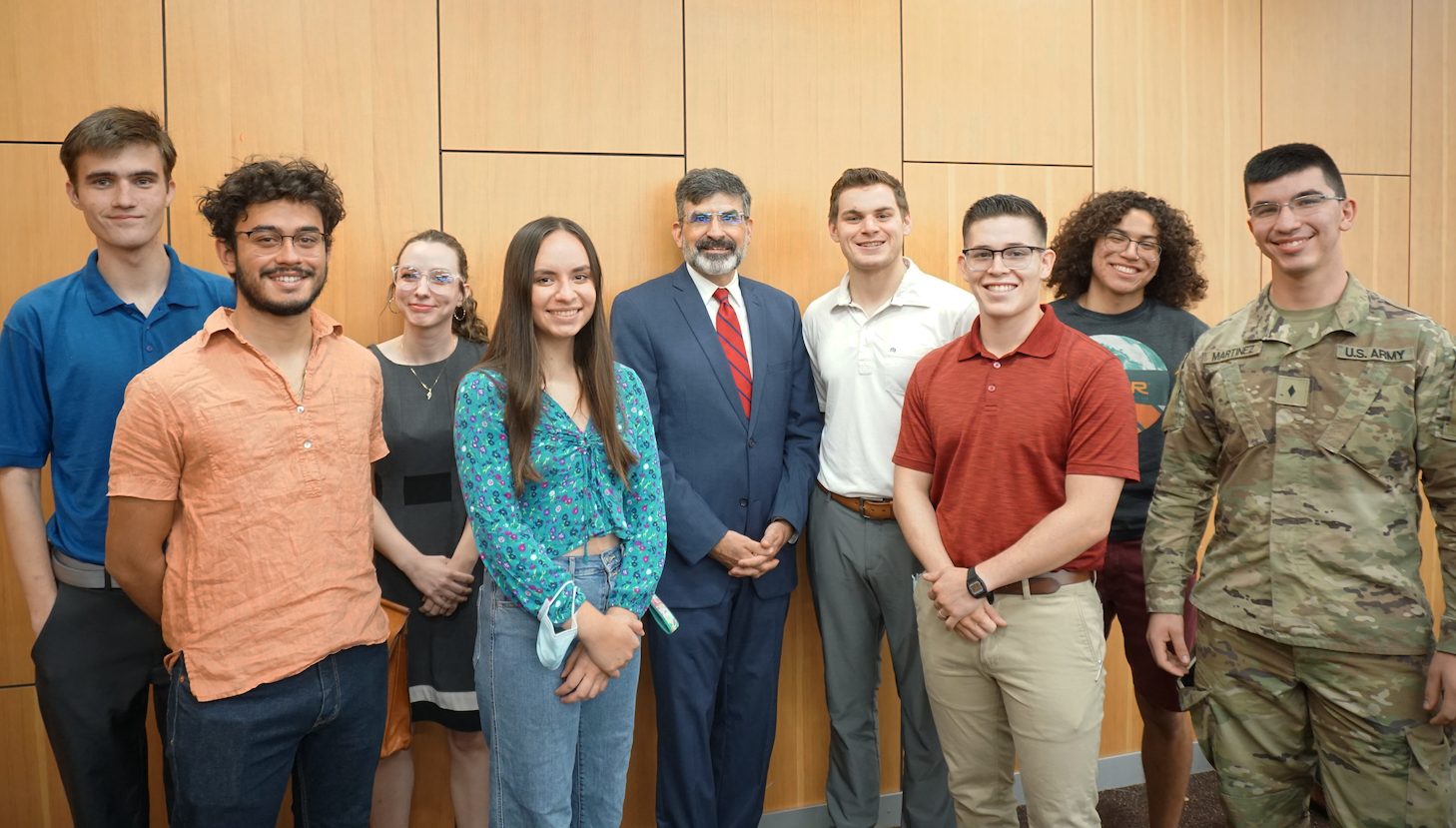 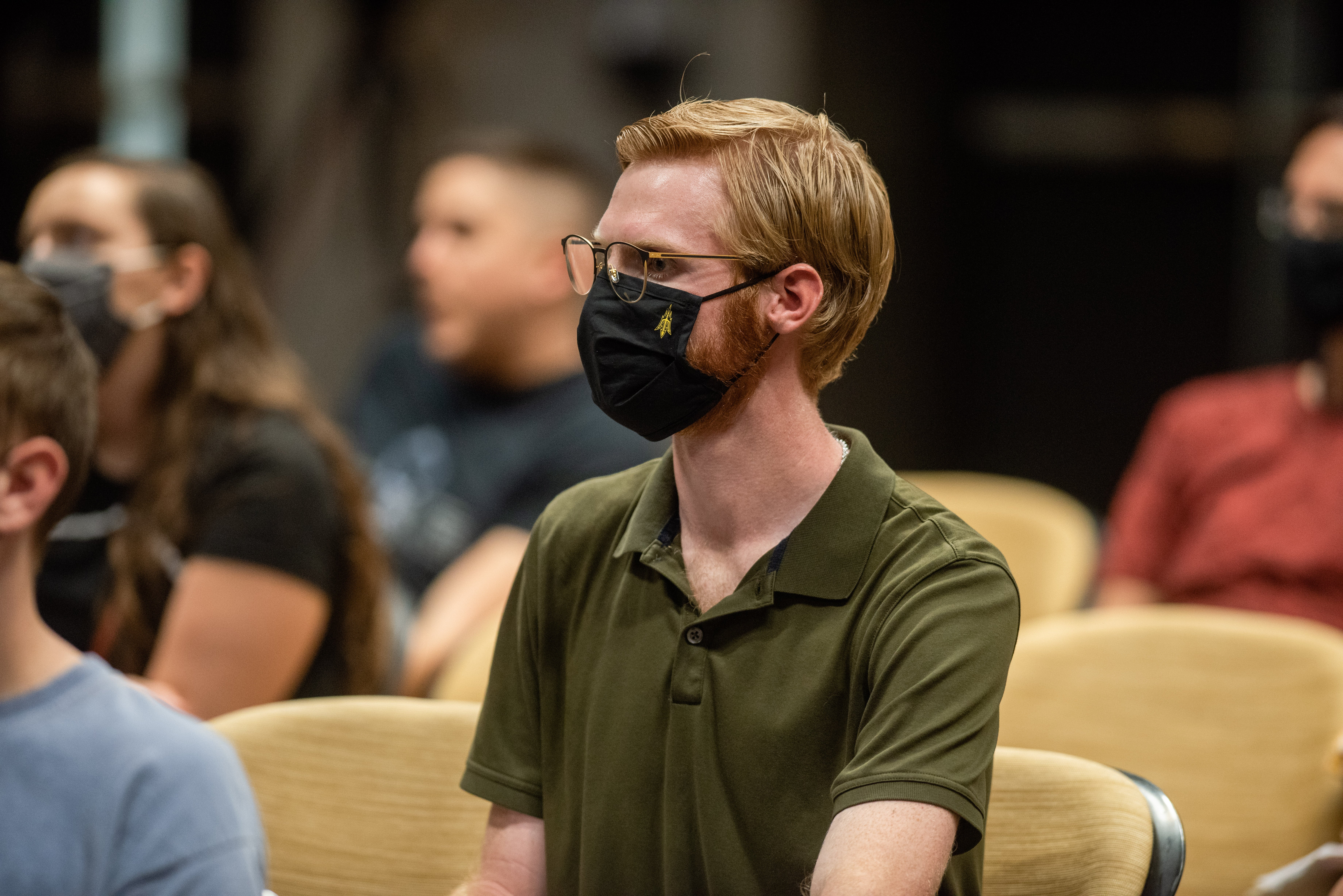 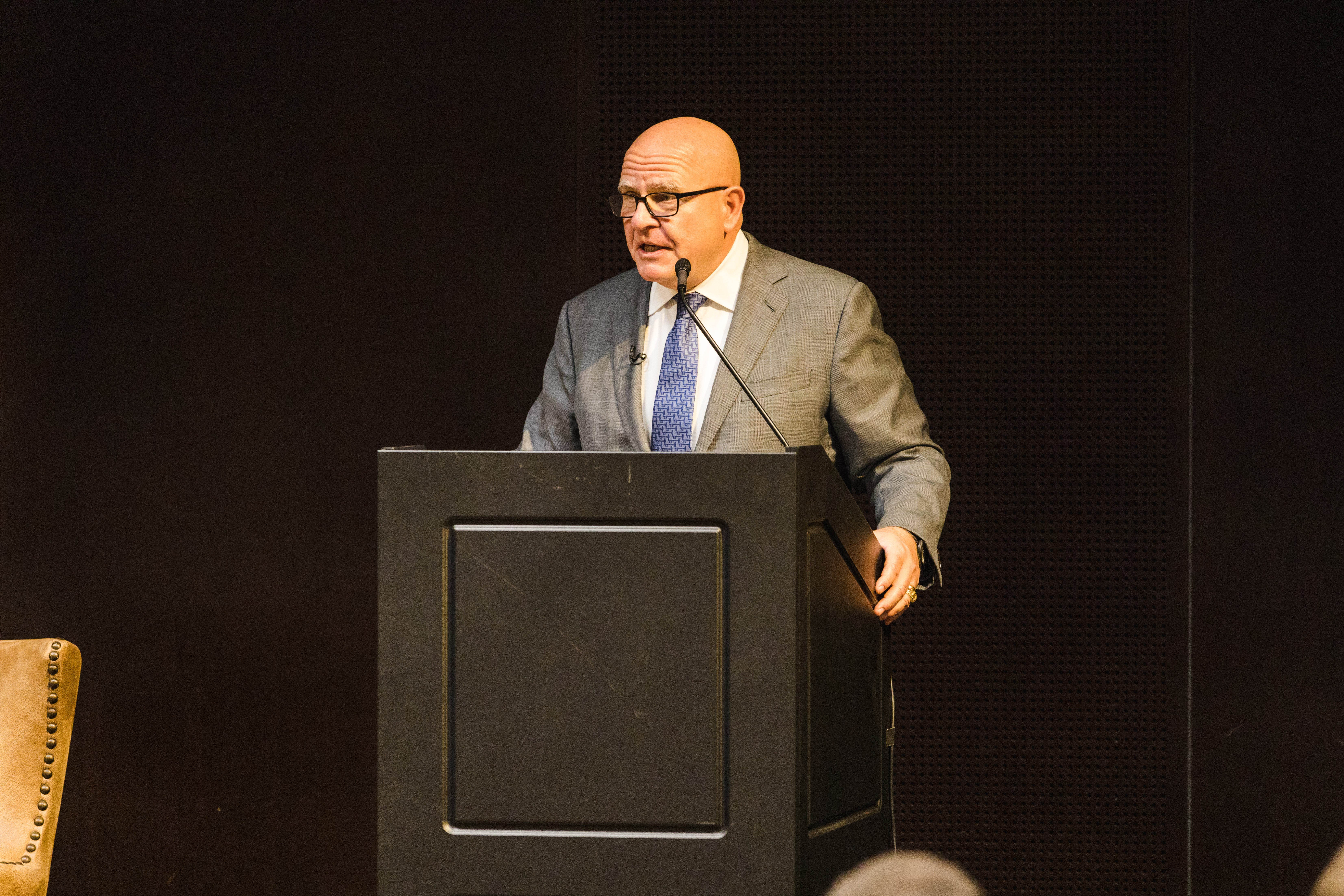 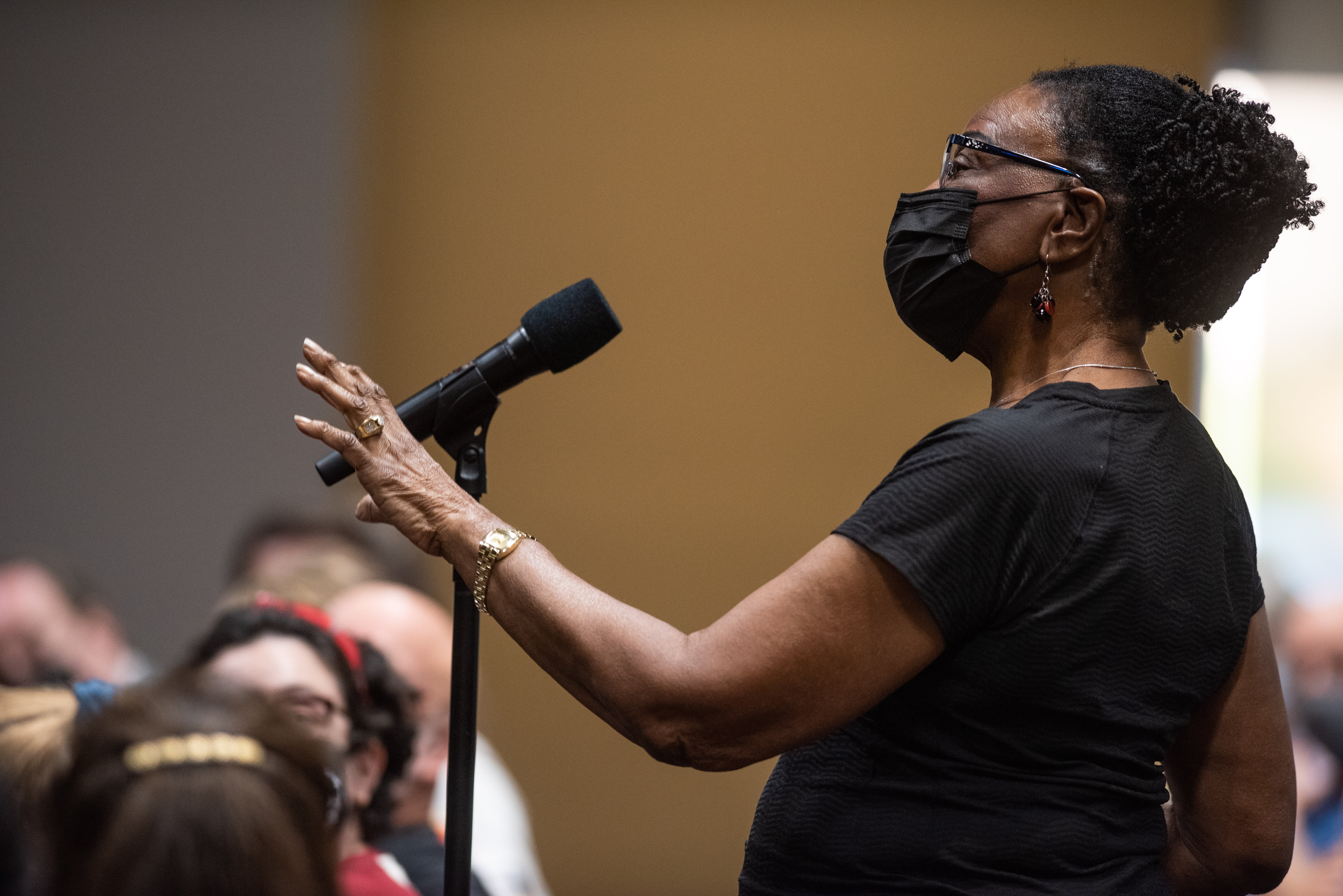 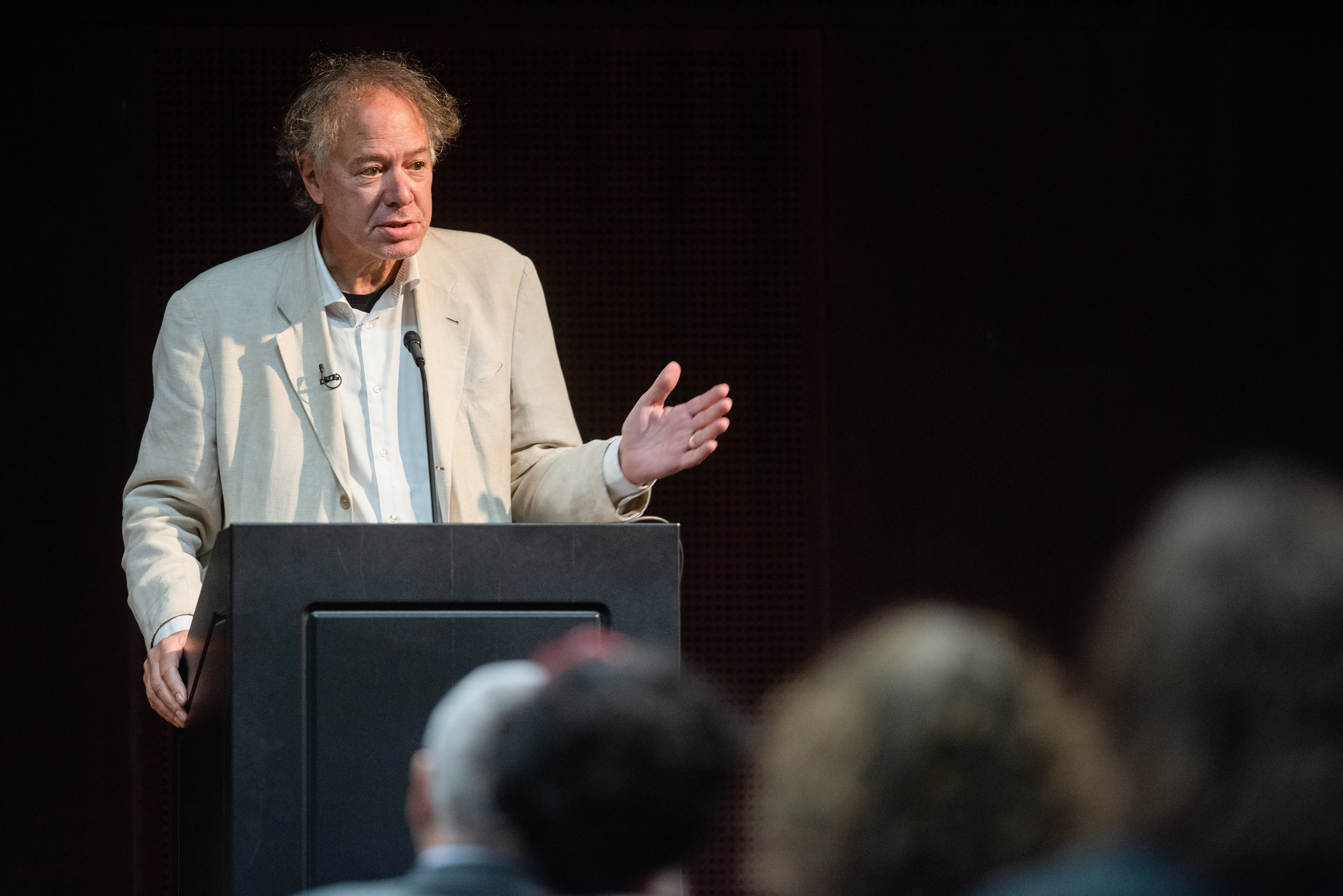 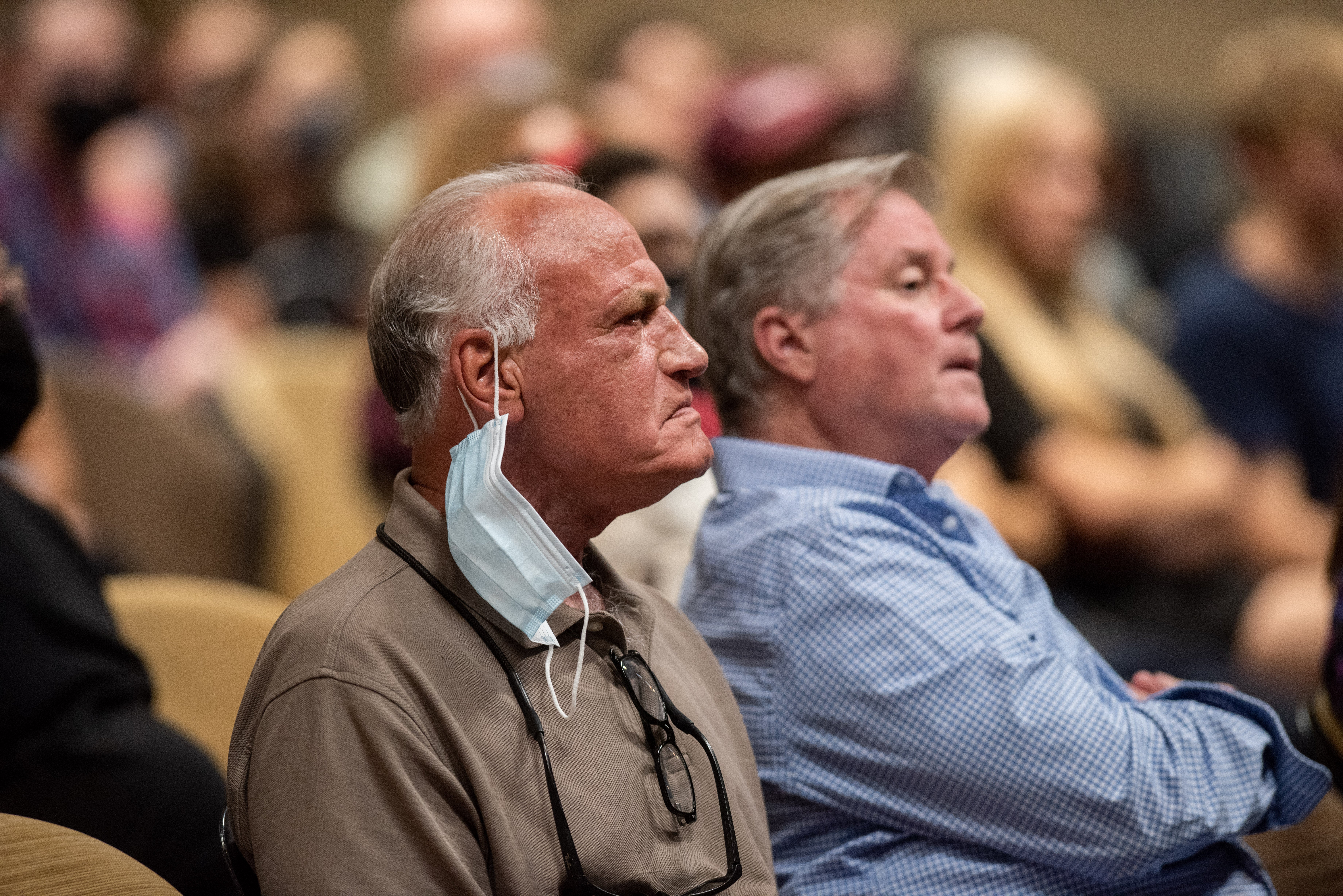 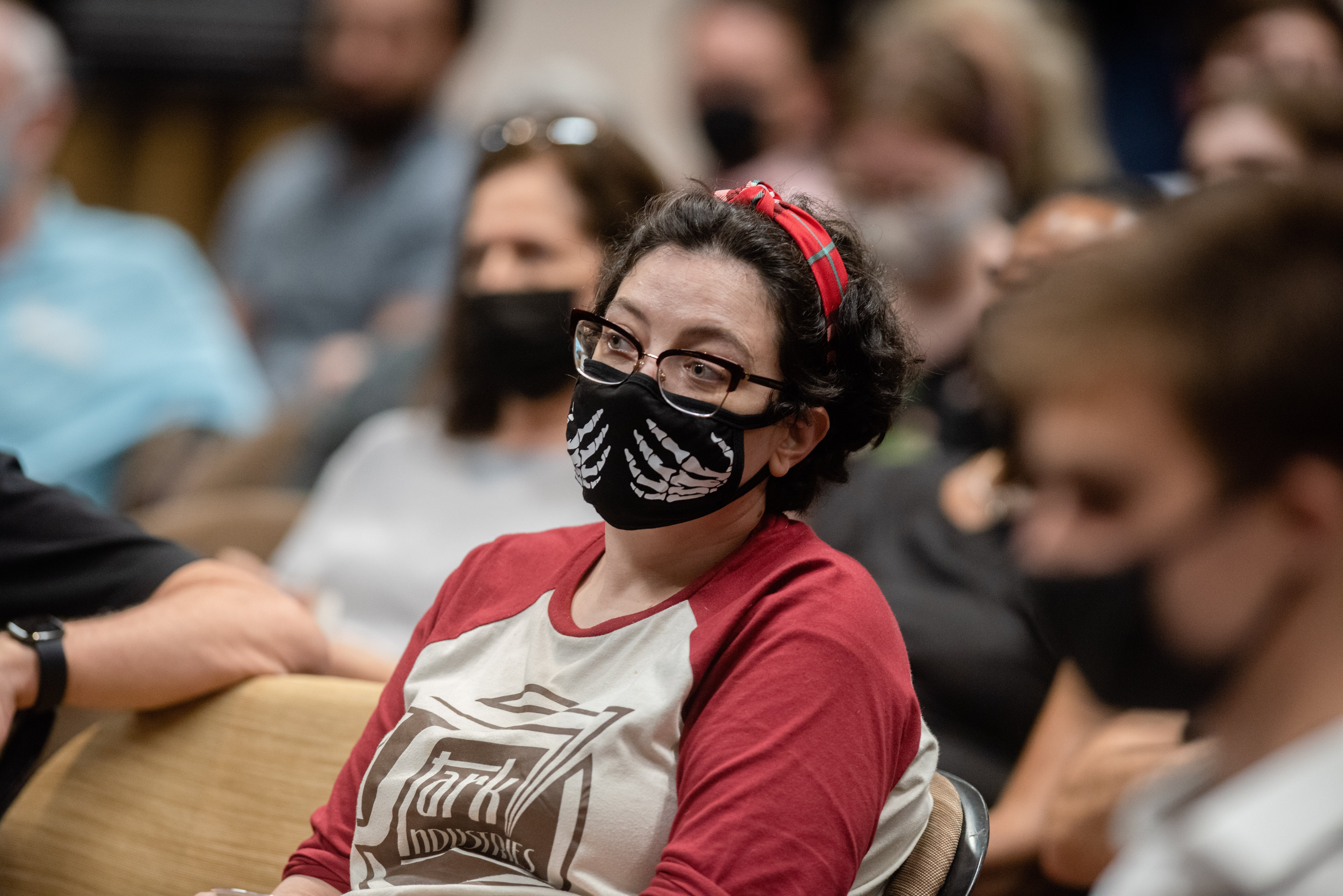 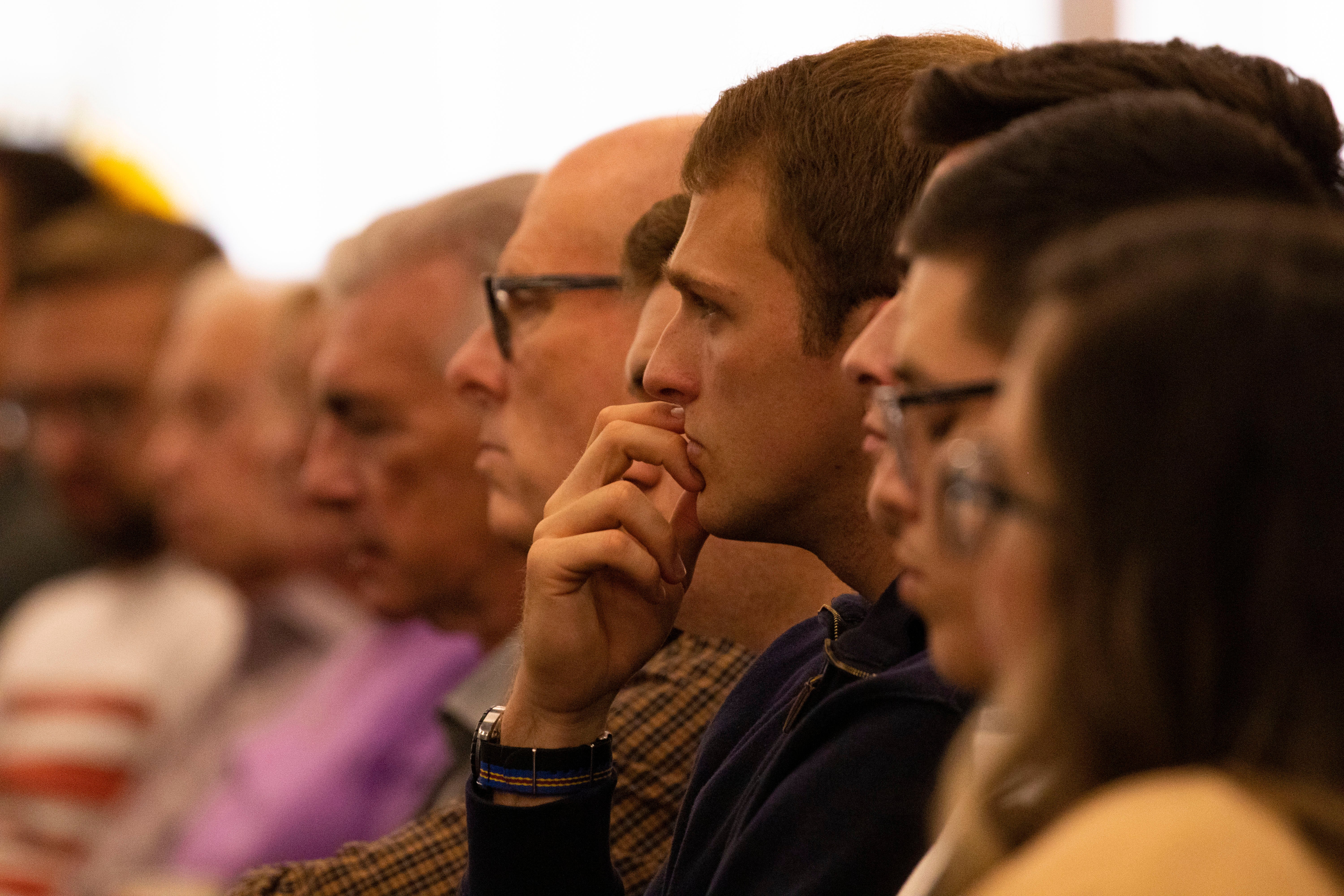 Can Americans find a path on which we can move together with a sense of purpose to rebuild the public and private institutions through which we sustain our civic, communal, and professional lives? How can we engage civilly amidst competing perspectives in the face of the many trials we face in politics and governance, at home and abroad? With these questions in mind, the 2021-2022 Civic Discourse Project offered an assessment of what the challenges are to American civic life and its institutions—including the university—and discussed how to rebuild the institutions and unity of our civil society. 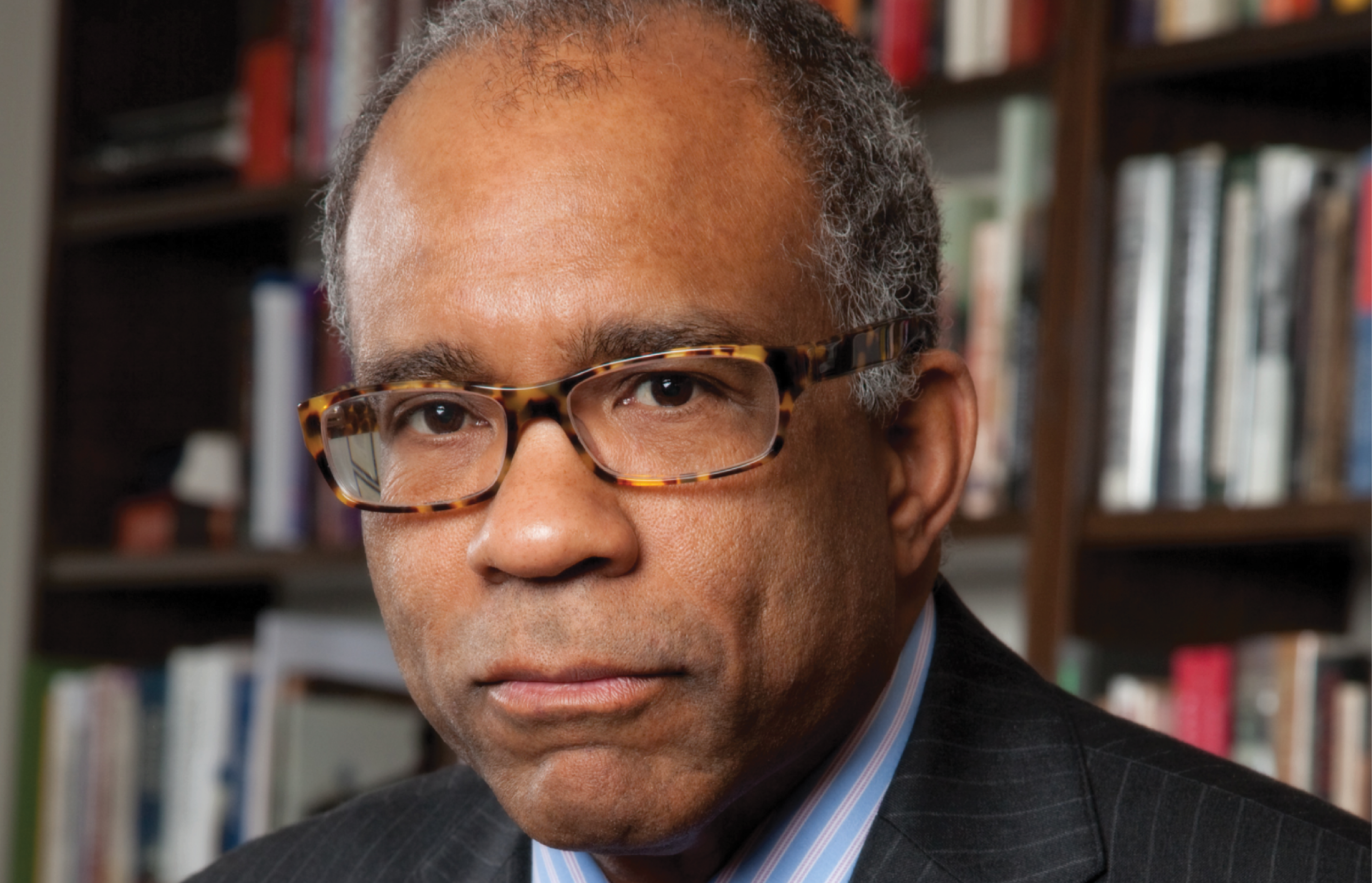 In response to Arizona State University President Michael Crow's call to address recent events across America and the civic crisis of conscience they provoked, the School of Civic and Economic Thought and Leadership proposes to lead a program of discussion, learning, and action for a renewal of our common pledge to respect and protect the equal rights of all Americans to life, liberty, and the pursuit of happiness. To this end, the theme of this year's "The Civic Discourse Project" will address Race, Justice, and Leadership in America in a virtual series. 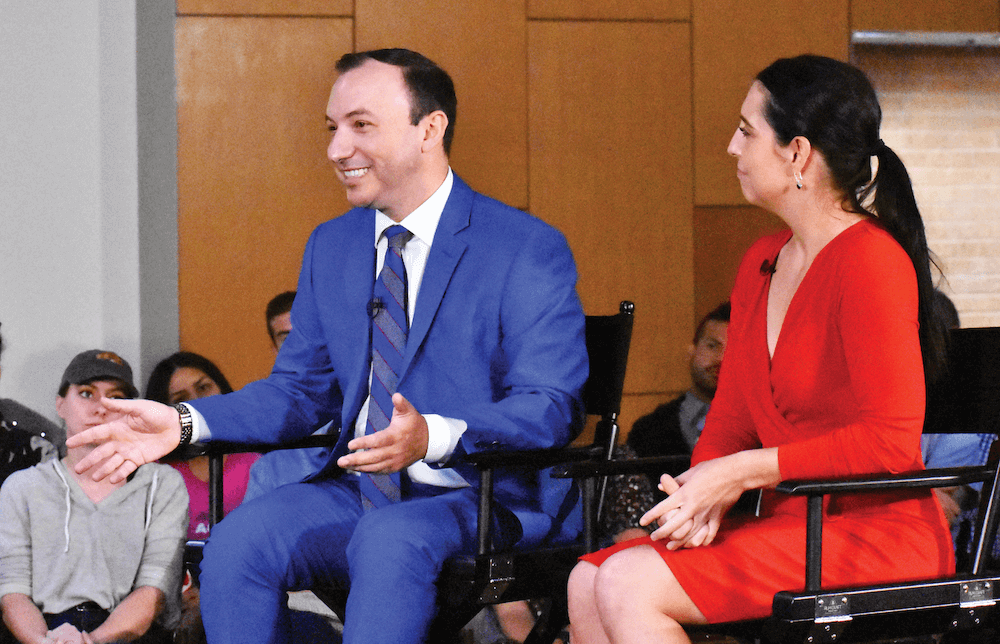 2019-2020: Citizenship and Civic Leadership in America

Mark Twain once said that “[c]itizenship is what makes a republic.” The primary purpose of civic education, as envisioned by the Founders, was to instill in our population the civic virtues, basic principles and practices of citizenship that would sustain a republic. What are the characteristics, advantages, duties, and responsibilities of a citizen today? Speakers include Robert Putnam, Yascha Mounk, David Leonhardt, Rich Lowry, Ramesh Ponnuru, and Shikha Dalmia. Political and intellectual polarization are a significant contributing factor to America’s civic crisis. By providing forums for civil disagreement, we hope to engage in the intellectual and civic work necessary to overcome the political divide and to renew and enhance America’s capacity for self-governance. Speakers include Jonah Goldberg, Arthur Brooks, and Kristen Soltis Anderson. 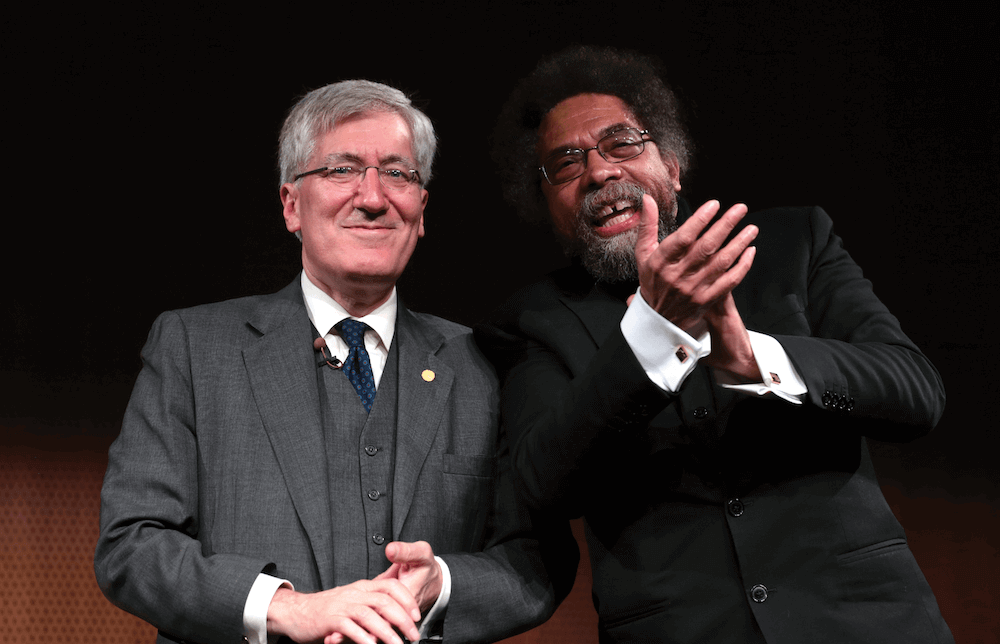 The school's inaugural lecture series took on the theme of free speech and intellectual diversity on college campuses and in American society as a whole. The school assembled high profile speakers from a range of viewpoints to discuss the meaning of intellectual diversity in education; the new challenges facing freedom of discourse; and the implications of this campus crisis for America’s civic order. Speakers include Jonathan Haidt, Steven Pinker, Allison Stanger, and Harvey Mansfield.