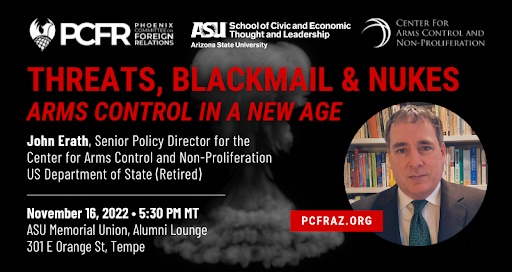 In January of 2022, leaders of the five main nuclear weapons states agreed that nuclear weapons were for “defense and deterrence only.” Little more than a month later, the state with the most nuclear weapons, Russia, upended that statement by invading its neighbor and using the threat of nuclear weapons to intimidate Ukraine and its supporters. Have we entered into a new Cold War? Are nuclear weapons to be a standard instrument of statecraft? Is the idea of arms control dead?

Come listen to John Erath, senior policy director for the Center for Arms Control and Nonproliferation in Washington, who will attempt to answer these questions and see if there is any way out of a future filled with threats of weapons of mass destruction.

The discussion will be moderated by SCETL Assistant Professor Luke Perez.

This event is co-sponsored by the Phoenix Committee on Foreign Relations and the School of Civic and Economic Thought and Leadership at ASU.