Sorry, you need to enable JavaScript to visit this website.
Skip to main content
Report an accessibility problem

Born and raised in Scottsdale, Arizona, Jonah chose to attend Arizona State University for its charter and his belief that the University is doing revolutionary work in sustainability and innovation.

Jonah spent his first six semesters intentionally exploring different courses that ASU had to offer, and it wasn’t until he participated in a Global Intensive Experience in India that he declared a major in civic and economic thought and leadership. After his experience in India, and taking a couple of courses with the School of Civic and Economic Thought and Leadership, Jonah started recognizing the values of the people involved with the school and some of his personal biases began to shift. 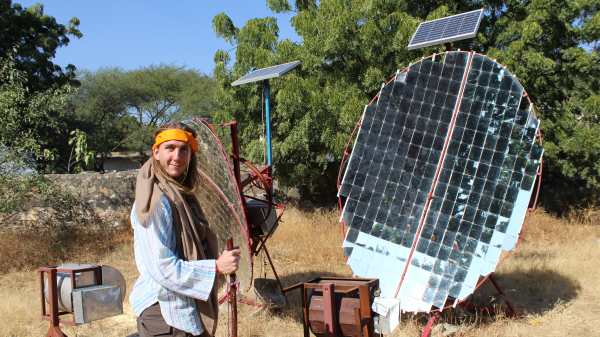 “I realized that to be a strong leader, I needed to be vulnerable and I was vulnerable in saying what I believe in and that I do aspire to be a leader… all of the SCETL staff backed me on that.”


When asked what he does in his free time, Jonah had a simple answer linked to a powerful purpose, “I grow plants.”

Looking around at our interview location, a thriving garden on the perimeter of the Social Sciences building, Jonah excitedly gave us a tour and told us a little bit more about the student garden club he started, Food For Change. With a mission to educate and empower students to engage in all aspects of the local food system, Food For Change supports and promotes local food initiatives on and off campus with the goal to bring awareness to the local food movement happening around the country in the community.

“I view food as being one of the biggest problems and the biggest benefits/solutions to a lot of our world’s issues,” said Jonah. “What we want to do is create a local food system where every single person is engaged in it – everyone’s growing the food, everyone’s eating the food together.”

Jonah’s vision of changing the food system involves creating edible landscapes with indigenous plants to conserve water, and empowering people to reconnect with food by growing some of their own fruits and vegetables to truly understand where food comes from and how valuable it is.

“I’m really using this food system change as a multi-dimensional approach to the complex solutions of the world like climate change, food insecurity, and population growth.”

But Jonah’s passion doesn’t stop there, he also works an internship and volunteers with TigerMountain Foundation in South Phoenix.


An internship that ignites passion


Jonah was drawn to TigerMountain Foundation because of its mission to empower communities to better themselves from within by beautificating vacant lots, planting community gardens, and selling and marketing what they grow at farmers’ markets. According to TigerMountain Foundation’s website, South Phoenix has one of the highest recidivism (return back to jail) rates in the nation. They are working to reverse this problem through their community gardens and landscaping initiatives.

Jonah’s passions are clear and as for his future outside of the University, he is listening to life and letting it direct him to where he needs to go.

“I have a quote that I like “to plant a seed is to believe in the future”. I’m a big optimist so my days are spontaneous, every day looks different. The only thing that is consistent is every day I am planting seeds metaphorically and literally and doing it with the intention of having a better future.”
The School of Civic and Economic Thought and Leadership offers Global Intensive Experiences during academic breaks. These are opportunities to travel and apply themes learned in classes to real service and leadership projects abroad. Prior to traveling, student participants will join classmates and faculty in the study and discussion of culture, politics, and relevant contemporary issues in the countries they will visit. During their travels, GIE participants will research, explore, work, and collaborate with people from different backgrounds and perspectives in order to gain a deeper understanding of the important issues that they will need to consider in order to be effective, thoughtful, globally-conscious leaders.