In May 2017, Kainoa S. was finishing his sophomore year at Seton Hall University in New Jersey when he started to feel ill. After passing out during his finals and a trip to the emergency room, he was wheeled onto an airplane that took him home to Scottsdale, Arizona. When the plane landed, he was rushed to Mayo Clinic where he was in a medically induced coma for over three weeks. 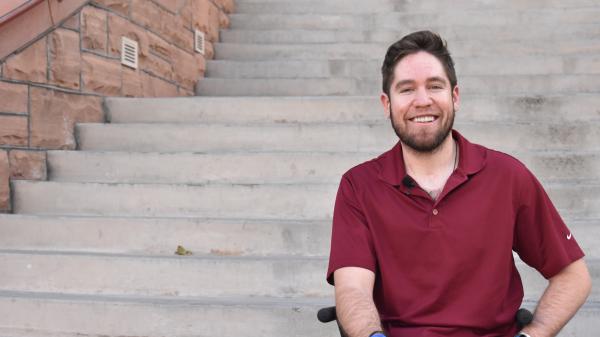 Kainoa endured more than 20 surgeries and 18 blood transfusions across 4 different hospitals in three states. He was considered dead twice during the entire ordeal.

“I woke up to the amputations being done of my legs and them telling me they have to amputate my hands and fingers,” said Kainoa.

Kainoa was diagnosed with a rare disorder called necrotizing fasciitis, commonly referred to as “flesh-eating bacteria”

“As I’ve found out, you make a plan and God laughs at you, right?,” Kainoa says. “I’m definitely a testament to that. He wasn’t laughing at me for taking away my plan, but just not understanding the grandness of it.”

An opportunity and honor

The summer before Kainoa got sick, he’d applied for an internship with Arizona Governor Doug Ducey. When Ducey heard of his story, he visited Kainoa in the hospital with an acceptance letter to the internship.

“It was really incredible how he had just heard about [my] story and wanted to help.”

Today, Kainoa works as an intern in the governor’s office. Whether it’s meeting with Representative Jennifer Longden to talk about planning a more accessible city for people with disabilities or helping legislative policy advisors, where he experiences first-hand what it takes to run a state government.

“It’s such an incredible opportunity and honor to be able to help the governor and help as many people as we can in Arizona.”

When Governor Ducey learned that Kainoa wanted to continue to pursue his education, he recommended the School of Civic and Economic Thought and Leadership, which at the time, was new to Arizona State University. Intrigued by civil governance, innovation, philosophy and learning what it takes to be an entrepreneur, the new academic program was a natural fit.

“It fell right along my alley of wanting to be able to help people, give back to the community and learn how we can do that at an institutional level,” said Kainoa, who is now a major in civic and economic thought and leadership.

“For me [SCETL] is really just a commonplace for people of different perspectives to come together and have the difficult conversations in a respected manner to where you’re both able to come out of it in an elevated way,” he added.

Kainoa also works with the K2 Adventures Foundation, which raises money for people living with limb loss and limb difference. He also travels around the state sharing his story and the lessons he has learned. Those experiences, combined with his education, have made Kainoa passionate about using his education to help others.

“My experiences have changed my outlook on the perspective of education and how we can use it to impact people.”

Despite all of the obstacles that Kainoa faces, he still keeps a positive attitude. Kainoa still expects additional procedures in the future, however, he plans to graduate in the next two years. When he does, his goal is to start his own nonprofit to give back to our local communities.