When Nicole M. was six, she and her family moved from Peru to the United States on the Visa Lottery Program. After moving around the country, her family settled in Georgia, which is where she lived before she visited Arizona State University’s Tempe campus. 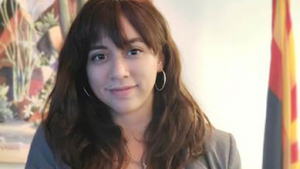 “I came to college not really knowing what I wanted out of it. I know I wanted growth and something to help develop myself and learn how to think; broaden my horizons a little bit,” said Nicole. “When coming to ASU, I saw all the clubs and organizations available to us, as well as the opportunities and the support for internships. It seemed like a really good place for someone who had motivation but not much direction.”

“I was told that when I was coming into a state university that you should expect big lecturers not to care about you. I found out that neither of those things were true; or at least not in SCETL,” said Nicole. “I had not, even in my wildest dreams, expected a professor that was so supportive, so genuinely caring about other students. I think that was one of the biggest reasons why I was able to stay in SCETL; because I realized that the professors and academics were really knowledgeable. But they also really care about the people they’re teaching.”

“I was being taught ways in which to understand the world. And that’s a little harder to conceptualize, but I think that served me a lot better, both as a person and aspiring academic. In the sense that you're not just being taught what to think, you’re taught how to think.”

Nicole credits Professor Taliaferro for helping her discover her interests, which led to an internship that shaped her experience in understanding why she wants to have a career at the intersection of policy and communication.

A summer in Washington, D.C.

The summer after her first year at ASU, Nicole moved to Washington, D.C. for the summer to intern at a Congressional office.

“It was beyond anything that I could’ve imagined doing as an 18-year-old… It helped me realize that a lot more is in reach than I thought,” said Nicole.

While in D.C., Nicole had the opportunity to interview Bernie Sanders, meet Jeff Flake, and experience the day-to-day business of working on Capitol Hill.

“I was able to be writing briefs on specific topics, going to meetings with members of congress with real staffers, and writing policy proposals. I like to think that I was having a real impact, and that’s not really something I associated with most internships.”

The School of Civic and Economic Thought and Leadership internship program is designed to provide students with leadership opportunities out in the world. Required to graduate with a degree in civic and economic thought and leadership, internships provide indispensable opportunities to explore careers in public service, government, and private sector; build your resume with professional experience; network with potential future employers; perhaps travel to Washington, D.C. or abroad; and prepare for your post-graduate opportunities. Learn more about our internship program.