The School of Civic and Economic Thought and Leadership is a new type of school, one that challenges its students to study classic works and prepares them to become a leader ready to take on 21st-century issues. Established in 2017, the school combines a classical liberal arts curriculum with intensive learning experiences that include study abroad programs, professional internships, and leadership opportunities. Students graduate ready for careers in government, law, business and civil society.

The School of Civic and Economic Thought and Leadership is dedicated to fostering a culture of intellectual diversity to facilitate the open and free contest of ideas that are a foundation to a healthy constitutional democracy. Our dedicated community of scholars embraces different ways of learning and discovery, and we strive to create an inclusive environment in our classrooms, as well as in our public programming and leadership opportunities.

student and community events every year 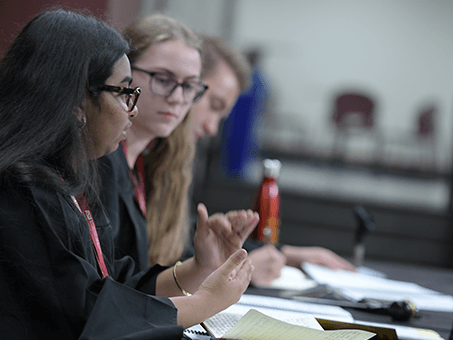 Programs such as our Civic Leadership Institute offer our community the opportunity to learn more about the U.S. Constitution and its founding principles. More than 60 high school students from Arizona, California and Texas attend the 2019 summer program where they spent four days studying famous court cases and decisive moments in the Lincoln presidency in classes led by the school's faculty. "Regardless of what career interest someone may have, the (civic and economic thought and leadership) courses prepare students to have a fulfilling and meaningful life."

- Elana Q., the first graduate with a bachelor's degree in civic and economic thought and leadership 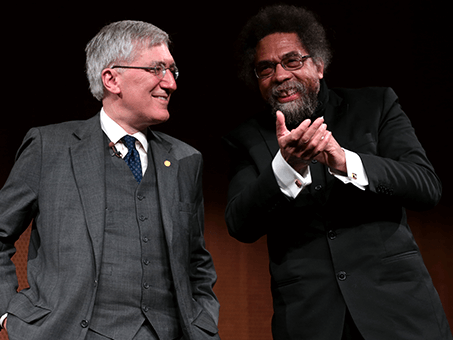 The school's public programming invites top academics and political commentators from around the country to speak at Arizona State University. These conversations are vital to promoting civil discourse on campus and in our community. Our annual lecture series is also available to a wider audience through a partnership with PBS Arizona.

"This school combines the study of great works with preparation for leadership, public service and statesmanship. There's no program I know of like this in the country that has this ambition to combine all of these elements."

- Paul Carrese, founding director of the School of Civic and Economic Thought and Leadership

A resource for the community

The School of Civic and Economic Thought and Leadership strives to be a civic education resource for the Arizona community. We aim to work closely with public and private school organizations around the state to help them provide high quality, civic education to their students.

The school has also been asked by the state government to advise the State Board of Education on the creation of a "State Seal of Civic Literacy." And through the following programs, we aim to provide numerous resources to the Arizona community: 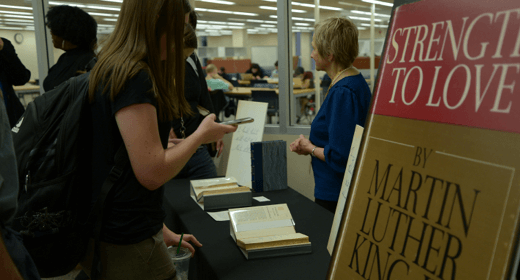 The school has purchased a portfolio of rare books and manuscripts that is managed in cooperation with ASU's Hayden Library. This collection of rare books is available for viewing by appointment at no cost and is regularly on display at our public programs. 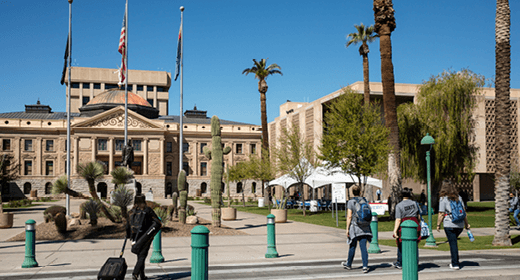 The school and the University of Oxford are engaged in this collaborative project that will allow citizens and scholars to have a better understanding of Arizona's contribution to constitutional democracy worldwide. 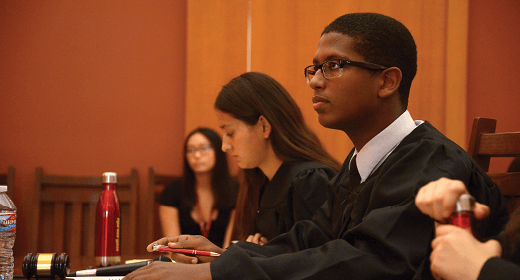 Each year, the school invites more than 60 high school students to come to ASU's Tempe campus to study the constitution and American principles. The program culminates in a moot court or mock cabinet battle exercise.

History of the School and Advisory Board

In 2016, the Arizona Legislature appropriated funding to create the School of Civic and Economic Thought and Leadership. The university moved swiftly to launch the new school, by forming an advisory board with highly renowned scholars who have studied, researched and written extensively about politics, history, philosophy, economics and leadership. Within months five of the nation’s preeminent scholars agreed to serve, and the advisory board assisted ASU in recruiting the founding director.

Learn more about our advisors.

The advisory board immediately assisted with crafting the founding mission statement, recruiting a director, and providing insight on the school’s curriculum. Board member and William R. Kenan Jr. Professor of Government at Harvard, Harvey Mansfield, who is one of the nation’s premier scholars of political philosophy, statesmanship, and American constitutionalism, wrote the following:

"A new school in Arizona State University should say why it exists and what it will do. Universities in America today live in an atmosphere of a certain conformity of opinion and suffer from an obvious lack of debate. Often there seems to be more open and vigorous debate in American society and politics than where one should expect it, in the American university. Yet the solution is not to bring in more politics and greater contention from outside, thus disturbing the peace necessary in a university for study and scholarly inquiry.

This school seeks to introduce a new level of debate over the large questions of life that always arise. These are questions of value: What is the best form of government? The most efficient and just economy? The good life for an individual? And also basic questions of fact and concept: Is science the only kind of knowledge? Does history have a direction and purpose? Is moral choice a fact or delusion?

These questions do not have easy answers, and indeed the questions have always been clearer than the answers. As a learning community of faculty and students, this school will approach them in two ways. One way is to look beyond the time and borders of our present society to the great thinkers who have contended for the high status of teachers of humanity. Some, like Homer, Dante and Shakespeare, are known as literature; others, like Plato, Marx and Nietzsche, known as philosophy. Both poets and philosophers make us aware that our way of life is not the only way, and they combine to teach us how our way is distinctive and how we ought to judge it.

The other way of studying the fundamental questions is to look within ourselves to the American leaders, both intellectual and political, who have inspired us. Here we turn from the human task of thinking for oneself to the civic vocation of contributing to our common life. As citizens our students face the responsibilities of the nation and the world that will be theirs when their time to lead arrives. We need to know what principles and institutions have made us Americans and whether they need to be reformed or reasserted.

Since America was founded on certain ideas rather than a single race or nation, we need to see what those founding ideas were. We need to see how they have guided our people to live, and how we have changed, for better and worse. Ours is the most thorough and enduring democratic society in history, and yet we debate its faults. We need to see how the ideas of the Founding Fathers were both invoked and reformed through the succession of leaders after them: by Thomas Jefferson, Abraham Lincoln, Woodrow Wilson, Theodore and Franklin Roosevelt, Martin Luther King and Ronald Reagan – and let’s not forget Mercy Warren, Abigail Adams, Edith Wharton and Betty Friedan. Nor can we fail to mention the two greatest books on America – The Federalist and Alexis de Tocqueville’s Democracy in America.

In sum, our new school looks outward to humanity and inward to America. Its ambition is to teach critical minds and to puncture complacency – and it tries to be both proud of genuine greatness and humble about human imperfection."